In Florida in 1959 VW dealer and motorsport enthusiast Hubert Brundage was trying his hand at motor racing with VW based specials. He found it expensive and they were unsuccessful but he still believed it was possible to be competitive using VW parts so that the average man-in-the-street could maintain and afford it. While on a business trip to Italy he visited race car builder Enrico Nardi. Brundage had been impressed by the quality of their racing steering wheels and commissioned them to produce a Beetle-based single-seater. 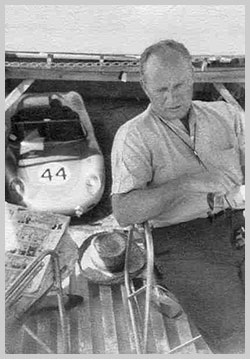 By 1962 there were eight Vees racing with cars of similar power; famously four got a run in an SCCA touring car race(!) in Savannah and three of them finished 1-2-3.

SCCA Official George Smith and garage owner Bill Duckworth took the concept a stage further by producing the Beetle-based formula racing cars (Formcar for short)  in volume. The first other manufacturer to come in was Eugene Beach who produced customer cars in quantity and a Formula Vee series was started by the SCCA in 1963.

At this point Porsche AG got interested in this (after all they were effectively the competition arm of VW) and competition boss Huschke von Hanstein ordered 10 Formcars and Beachs. The Vee concept was therefore explored in Germany and some drivers we recognise today started their careers: Jochen Mass, Dieter Quester, Gerhard  Mitter and Marc Surer. Volkswagen themselves saw this as a marketable concept and started to co-ordinate the launch of Formula Vee worldwide.

In the UK the launch included a 12 round Formula Vee championship organised by the BARC which preceded Brands Hatch’s Formula Ford by two weeks in 1967! At the time most were Beachs (or Express cars which were Beachs modified by VW GB) and there was such a thing as a works team). The first race at Silverstone was won by Jenny Nadin although well-known journalist Nick Brittan led for all but the last lap till he spun. It is rumoured that this was orchestrated by VW because both were works drivers and more publicity would be obtained by a female winner. Nick Brittan went on to win the championship and was often representing GB in the European Western Zone championship – VW’s way of finding a Vee World Champion. Drivers would fly to these European races and join in the VW publicity bandwagon. Brittan represented GB in the Monaco Grand Prix support race although he didn’t get further than the first corner.

As today throughout the world Formula Vee flourished as the starting racing car formula. The huge number of well-known drivers who have raced in Formula Vee makes it almost easier to list those who haven’t. Four Formula One World Champions cut their teeth in the series: Jochen Rindt, Emerson Fittipaldi, Niki Lauda and Keke Rosberg. In the UK Brian “Yogi” Muir, Gerry Birrell, Brian Henton and Ian Flux are best known, Gerry winning a Scottish championship. Also Grand Prix driver Peter Arundel was involved in the promotion of the McNamara Vee and there is our own well-known 1172 stalwart Gordon Rae who raced his own design.

The UK series was managed by The Formula Vee Association under the wing of VW GB Ltd. encouraging series sponsors like the VW camper conversion manufacturers Danbury. The regulations followed the international rulebook, the cars having the link pin axle and 1200cc engine. Chassis manufacturers were few initially and mostly from Europe e.g.. Austro, Celi & Kaimann but some UK companies did offer cars including Wooler (an engineering company producing an Austro copy), Landar (a Birmingham VW dealer called Randal – Landar backwards), Smithfield (another VW Dealer) and CG. (Cotswold Garages in Fowey). Major racing car manufacturers were primarily interested in Formula Ford which was all the rage so Vee regulations were changed to modernise the look of the cars in 1973 allowing 1300 engine, disk front brakes, torsion bar front suspension and rack & pinion steering. With loyal supporter Jan Bannochie arranging the races and Vee enthusiast Ian Bunker producing the newsletter, Vee Sport News the series ticked on.

However, storm clouds were gathering over Europe and VW turned to promoting the water-cooled cars such as the Golf rather than the Beetle, particularly in competition, even introducing the Scirocco Cup to promote their sporting image. Formula Ford was the route to motor racing stardom and as a result Formula Vee grids dwindled in the mid 1970s to no more than about half a dozen with races held mostly at Lydden Hill. Stalwart supporters like the Thames Estuary Motor Club, Sutton Coldfield and North Birmingham Automobile Club (SUNBAC) with their annual Silverstone race kept things going along with Howard Strawford’s BRSCC Castle Combe Easter Monday meeting a regular season opener. Nevertheless Vee expertise fell away and the formula gained a reputation having only few entries of slow, oil-spilling unreliable ugly racing cars.  VW themselves ceased its support and the formula was demoted effectively to club racing.

At the time, racing and support was dominated by one man, London Irishman Tim Flynn who saw a way forward. He negotiated with the 750 Motor Club in 1979 for it to be taken under its wing. Membership secretary Dave Bradley saw it as an entry-level single-seater low-cost club racing series dovetailing in perfectly with their other formulae: Formula 750, Formula 1300 and Formula Four. At this stage the series was guaranteed a championship series of races and a full-time administrator. It was around that time that a contract with Dunlop to supply control tyres for the formula was established – one that has run continuously for 25 years! This was quite a coup as there was no alterative supply for the 15inch size wheel. To complete the Formula Vee package as we know it today the standard gearbox ratios were made mandatory. The significance was that you were no longer allowed to use the expensive Supervee gearbox to give you that edge at certain circuits, nor could you fit the tall VW Transporter third gear to keep up. All drivers had the same equipment, theoretically and that has remained so to this day. 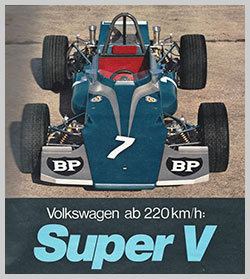 However there was still a shortage of available chasses until Vee (and Austin Seven performance) engine guru Stuart Rolt who had produced the Scarab 1 – a space frame car based on the Austro – stuck his neck out and designed and built the Scarab 2, a steel monocoque design based on dimensions of the Van Diemen RF78 and using other proprietary bodywork. Most significantly it was available on the market as a kit and was designed as a customer car. After Flynn won a championship race on its debut Stuart got Andy Diamond to lay down a batch of four cars and took deposits on all, one of them from National Coal Board Museum curator Andrew Storer.

This re-packaged formula brought the class to the attention of lots of potential club racers. For once in a long time they could actually buy a complete new car. A 15 round national championship was formed and sponsored in turn by several aftermarket Beetle suppliers. The series blossomed, often with the need for a qualifying race each round.

In global terms the demise was felt mostly in Europe. In fact there is now an historic Vee class of racing based in Holland. Vee had been plugging on in South Africa, New Zealand and Australia. In Ireland and the US it was going great guns. A core of enthusiasts had kept it going in Germany and it would be true to say that Vee racing still exists today in Finland for example but there are few cars, mostly historic and in their own class in races with lots of other single-seaters. Regulations have localised to each country and whilst the Germans use the Polo engine and aerofoils, the Irish use the standard Beetle 1600 engine. Contrast the Irish who have recently renamed their series from “Formula VW” to “Formula Vee” with the Aussies who are “going modern” by changing their name to “Formula First” which have regs similar to the UK.

In the 1980s new chasses came on the scene from the US – three Predators (one from 2001 champion Jeremy Clark) and Citation conversions called Spyders from Mike Steley. The cockpits of these “lay-down” cars in the tradition of the US oval slip-streamers needed to be widened to conform to UK rules. These were followed by customer cars from Ireland. Cars from the stable of David Sheane in Naas were ubiquitous in Ireland for years and needed very little changing to fit the UK regs. Paul Heavey followed suit first with a Leastone for the victorious Ray Moore and then production versions thereafter. 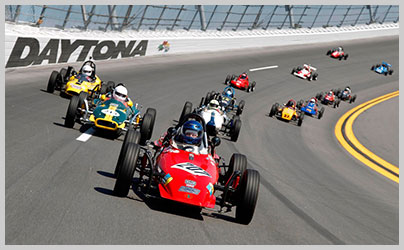 Also the series acquired several recognised engine builders who could produce quick reliable engines. Graham Card who for so long built Beetle engines for aeroplanes turned his skills easily to Formula Vee with the GAC concern. Also emerging from the shadows was Mac Daghorn who so long had been the builder of a select few powerful engines was supplying his services to more drivers. Andy Storer who from being the first Scarab 2 customer had now taken over the franchise to produce the Scarab and supplied engines of his own under the RSS banner. A similar route was taken by current Formula Vee Official Alan Harding who once owned an Austro and now builds a great deal of Vee engines using his initials AHS. Now both GAC & AHS offer new cars.

The Vee package was now strong enough to support the concept of race hire which really took off in the 1980s with 4 or 5 teams now running race hire operations. This has become such a feature that first-timers in motor racing are targeted for this route, particularly at the Racing Car Show. In fact Formula Vee now introduces more novices than any other single-seater category.

So popular was the category that in 1990 the Formula Vee Centre was formed to harness the desire for a social club for drivers and their families. The Exhibition stand, BBQs, End of Season Awards and test days are all arranged through this club-within-a-club. 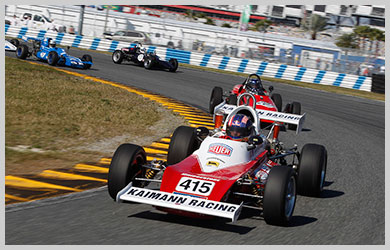 Because drivers are so keen to race their cars they persuaded the 750 Motor Club to organise a single-seater relay which they supported well. Vee’s 30th birthday was a festival at Brands Hatch with a feature on BBC’s Top Gear TV programme with Tiff Needell doing the driving and several international drivers racing in their own and “allcomers” races. Also the clock is being turned back as UK drivers are competing successfully abroad. Firstly there were sojourns to Scotland and races at Phoenix Park, Dublin and Mondello. Then they provided the core of drivers to race with the 750 Motor Club at Croix, France. Now regularly a group of UK drivers race in the German Formel Vau Series which has expanded outside the country to such places as Spa, Dijon and Monza and allows UK-specification cars to race with them. In fact for two years an Englishman actually won the German Formel Vau championship. Some “Brits” also compete in the historic European series and other intrepid drivers – Andy Storer, John Bowles, John Randall and Trevor Welsh – have competed in the US Formula Vee run-offs in the US.

So now, beyond its 35th year, a form of motorsport that was based on similar equipment for all has flourished by retaining that adage and is the most popular and successful single seater formula in the world.