This section will try and provide an overview into the technologies utilised within Formula Vee, and hopefully try and dispel some of the myths and rumours around various aspects of the cars makeup:

Fundamentally Formula Vee is a “Single-seater formula of free design and construction”… that said there are limits around this. The utilisation of certain VW Beetle suspension is mandatory. The front suspension must compromise of the VW axle (H-Beam) of trailing link design, hubs, stub axles and spring pack (leaves) and the majority of the VW rear swing axle components have also to be used. This causes a few problems as these components are great for mass production and transport on the road but by their very nature have fundamental “design flaws” when it comes to adding them onto a racing car.

The front VW beam is of a trailing link design that utilises two longitudinal links to support the steering ball joints. The wheels are effectively pulled over bumps – the links are in tension when the wheel encounters a resistance. The advantage of utilising a trailing link design is that the system is fairly compact (especially if torsion bar springs are used) and can provide a good ride for road cars. However, when subjected to lateral cornering forces, the arms tend to bend so must be made strong to resist these forces. The camber of the tyres also changes as the vehicle rolls in cornering, reducing adhesion as the outer wheel tends to go into positive camber that is directly proportional to the amout of roll. Trailing link suspensions have an infinitely long swing arm length and a roll centre at ground level.

The placement of dampers on a Formula Vee car varies greatly with each solution having its own up and down sides. The first Formula Vee cars used a completely standard beam with the suspension “turrets” still attached whilst utilising stock dampers. Over the years these turrets have disappeared from post 1970ish cars as different solutions have been tried. In UK Vee today both external and internally enclosed damping is used, each solution having its own set of compromises. External solutions utilise the bottom arm mounting point and then a fixing point on either the beam or the chassis. Internally mounted dampers utilise either pull or push rods connected to the suspension arms then through a rocker to the mounting point which could be behind the pedals or horizontally on the floor or above the legs.

If you think that the front suspension was compromised then the rear is even more so in its standard guise. The problems start with the fact that the regulations stipulate the use of the VW swing axle. This basically means that the axle is always perpendicular to the wheels… at any angle!!! Think of the axle and the wheel as the letter “T” on its side. 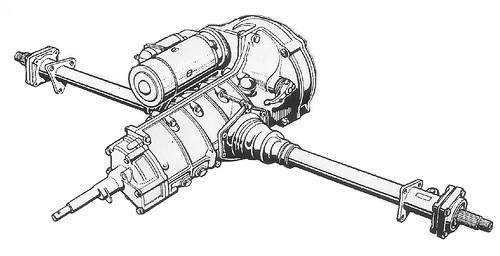 Conventional thought in the design of race car suspension says that the connection of the hub to the chassis by the means of a coil over type arrangement is the way to go (as depicted below). Unfortunately this is probably the worst thing the car designer can do.

The reason for this is highlighted in the next picture below. Due to the nature of the beam axle the roll centre is located above the pivot point for the axle. What this means is that any cornering force applied to the wheels cause a lifting of the chassis. This is because the tyre and beam axle are always perpendicular to each other and the connected gearbox can do nothing else except to lift up in the air.

To combat the deficiencies of the beam axle design many solutions have been tried (and probably have yet to be tried), but the main ones utilised within the UK are the Z-Bar and Zero Roll setups.

As depicted above and below the aim is to try and keep both wheels under control at a known camber. The Z-Bar has the advantage that roll stiffness can be altered by preloading the Z-Bar.

Both of the above diagrams depict the solutions in their “pure” form. Walk around the paddock you will notice a myriad of different setups to the basic platforms as shown.